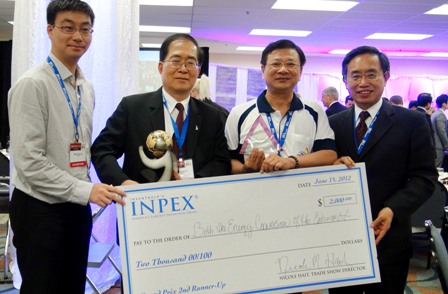 Taiwan cleaned up at the Invention and New Product Exposition in the U.S. city of Pittsburgh June 15, capturing 40 golds, 28 silvers and seven special awards.

An Ambassador Award was also presented to the Taiwan delegation for the nation’s active participation and excellent performance in the event over the past years.

Out the 89 submissions by Taiwan, an energy- and electricity-saving device invented by Taichung-based National Chin-Yi University of Technology stood out the most, bagging the INPEX Grand Prix-1st Runner Up prize and Best Invention of the Far East award. It was the first time that an entry from Taiwan has received the first runner up prize.

Another outstanding invention was a temperature display device for faucets by Lee Kai-hsi with Say Do Easy Co. Ltd. The creation allows users to see water temperature easily, preventing them from being scalded.

Students from National Kaohsiung University of Applied Sciences (KUAS) also demonstrated their creativity at the fair.

A warning device by Chen Yi-ting, a doctoral student in electronic engineering at KUAS, can detect and record a driver’s reckless driving behavior through sensors installed in the tires.

A smart rehabilitation device, designed by Kao Ching-hsin, an electronics engineering undergraduate, allows patients to rehab anytime anywhere, even as relevant information is relayed to their physical therapists with cloud computing technology.

Now in its 27th year, INPEX is America’s largest invention show, attracting tens and thousands of catalogue retailers, distributors, inventors and manufacturers every year. It has featured over 1,000 creations from 23 countries in the past years. (HZW)

Write to Grace Kuo at mlkuo@mofa.gov.tw