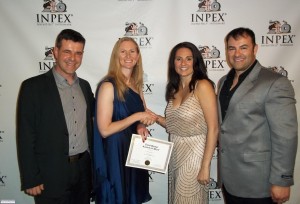 June 13-15, 2012 – Husband and wife inventors William and Chandra Vandry from Austin, Texas competed in the largest international Inventor’s Expo in the world. Every invention and new product at INPEX is eligible to participate in the INPEX International Invention Awards Program. Over 600 inventions competed for awards from the USA and International competitors.

An international jury judges entries, with winners determined on the basis of usefulness, creativity and overall appeal. Winning an INPEX invention award adds credibility to inventors on an international level.
Operated by InventHelp, The Invention & New Product Exposition (INPEX) is a unique trade show that showcases numerous inventions, new products and innovations that are available to license, market or manufacture. “The Invention Show” brings inventors and entrepreneurs together with industry representatives in one convenient forum.

William Vandry is an Instructor and owns a training academy of martial arts in Austin,Texas specializing in Brazilian Jiu-jitsu, a popular martial art seen in the Mixed Martial Arts sporting events such as the UFC (Ultimate Fighting Championship). (www.austinbjj.com and www.williamvandry.com). His wife Chandra is an RN in Allergy and Immunology.

The Vandry’s invention was an International INPEX award winner, and won the coveted Gold Medal Award of Merit for the invention called St Jude’s Miracle Oil™. The oil is an aromatherapy massage oil.

Keynote speaker for INPEX was Kevin Harrington, an investor seen on ABC’s Shark Tank TV show, and chairman of AsSeenOnTV.com.

The Vandry’s were able to meet with Harrington for a quick review of the St Jude’s Miracle Oil™. Harrington stated that he did hear of the product, and he and his two co- judges sampled the oil, and within 2 minutes acknowledged its cool, soothing effect.

“I was really impressed when the first thing Mr. Harrington told Chandra and I was that he actually heard of our product!” Wow…our product somehow was in the buzz to Mr. Harrington, the godfather of infomercials!”

Jeff Meltzer, Electronic Retailing Association Board Director and Direct TV judge on the Pitch session, similar to the Pitch tank session with Kevin Harrington, listened with five judges of INPEX to the Vandry’s pitch on the St Jude’s Miracle Oil™. Each judge sampled the oil for tension. Within two minutes, each of the five judges stated the product did work.

Mr. Meltzer is a regular in the direct response industry and college lecture circuit. He was featured in the CNBC Special, “As Seen on TV” and is a frequent contributor and quoted expert in the Industry’s trade newspaper and magazines. Currently, Jeff is an Executive Board Member and Board Director of the Electronic Retailing Association that oversees over 300 billion dollars in direct response advertising throughout the world.
Jeff Meltzer after sampling the oil commented similar to Harrington’s. He told the Vandry’s: “This oil could be gold. Get me some clinical tests and come back.”

Andrej Skrinjar is a Chairman of the INPEX International Judging Committee. Hailing from Slovenia. Judge Skrinjar along with five judges also sampled the oil.